Musings from a wannabe band dad....

I've sang to Clemence pretty much every night since she was born. I don't say that to brag, or to quantify how much time I spend with my daughter; it's just a simple statement that happens to be true. You spend a lot of time as a parent, wondering (read: worrying) what impact events and acts are having on your child; how much of their personality is nature and how much is nurture. You can be drowned in parenting advice from all quarters. I've always, perhaps lazily, taken the approach of ignoring it all and doing what feels right for me... for us.

So I start this blog with no particular conclusion in mind, and I'd welcome any comments or questions, no matter how tangential. 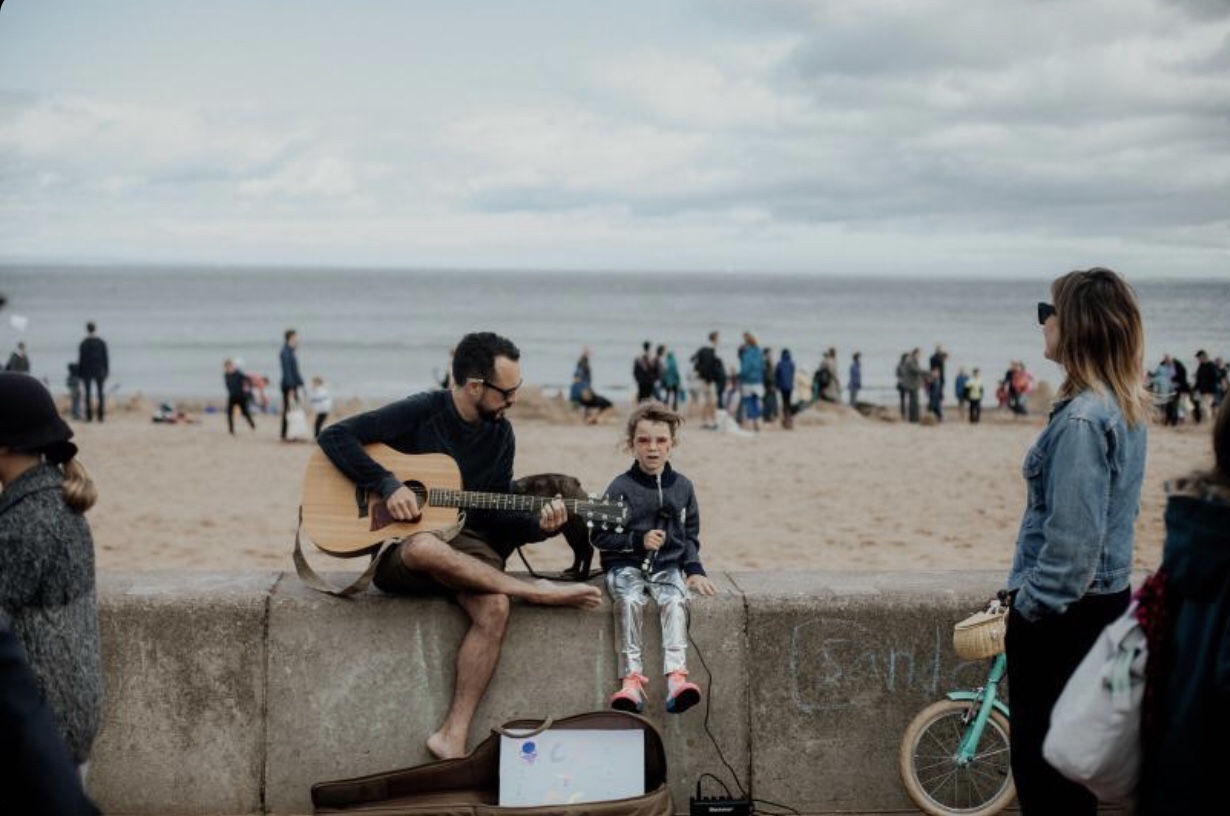 I've always loved playing music. I'd love to be 'good' at it, but I'm happy mucking around and playing songs for my own interest and amusement. I played Saxophone at high school, dabbled around with keyboards and then, out of respect for my neighbour's eardrums, bought an acoustic guitar a few years back. Again, I'm certainly not a 'good' guitarist, but I find it a really nice way to wind down and switch off from the day to day.

When Clemence came along it was (no big revelation here) a shock to the system. Added to the general life upheaval and sleep deprivation, Clemence cried a lot as a baby. A. Lot. I found myself wandering round the house with her in my arms trying to get her to sleep. Singing to her was probably as much my way of staying sane as it was helping her sleep! But even as the long nights eased and the wake up time stretched out, the singing stayed. And quite quickly it became clear that CC (her nickname) loved music too; particularly singing. Jonny Cash was her first real love, and we took her to see a Jonny Cash Tribute band when she was quite little.

Car journeys were always accompanied by a 'CC playlist' and some high volume duets! I'd always put instruments in front of her to see if she was interested, but she didn't ever want to 'learn' to play them. Actually, she had the same approach to reading and writing.. she didn't want to learn these with us at home; she was desperate to get to school and THAT's where she said she would learn. True to her word, she loved P1 and did really love learning from her teacher.

Some time earlier this year, when she was really starting to show an interest in performing her songs, I suggested that we do the Big Beach Busk. The Beach Busk was the brain child of our good pal Paul Lambie, and is now in its tenth year. The Edinburgh Big Beach Busk originally started when Paul wondered at the lack of music filling Portobello Beach. “I invited every musician I knew and more that I didn’t. They all invited friends and that first year we got about 80 buskers,” Paul said on Facebook. Since then it's grown and grown and the prom is filled with all kinds of performers that appear on the day. An "all day flash mob" as Paul has described it in the past!

In my head, it was a good chance to do something together that would be a proper challenge, and perhaps teach her about the importance of practising.

If you follow our Instagram Stories, you'll know that CC wants to be an architect - Sorry! IS a mini architect. We do a lot of projects at home.. making things, building things.. our Make A (Veggie) Burger Game (TM) is still played at home and one of my favourite things we've created together! 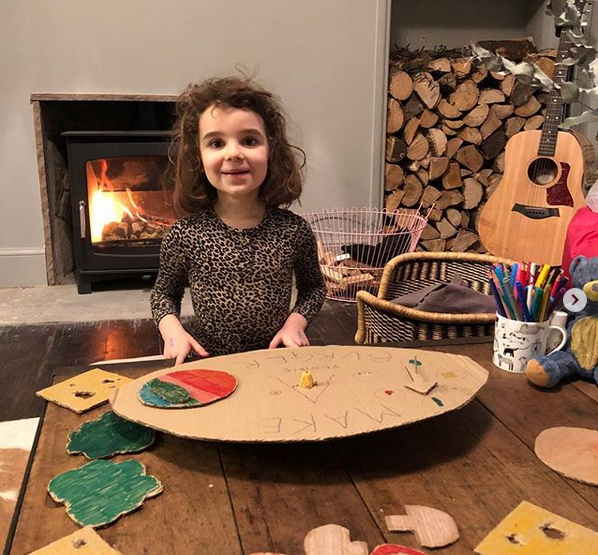 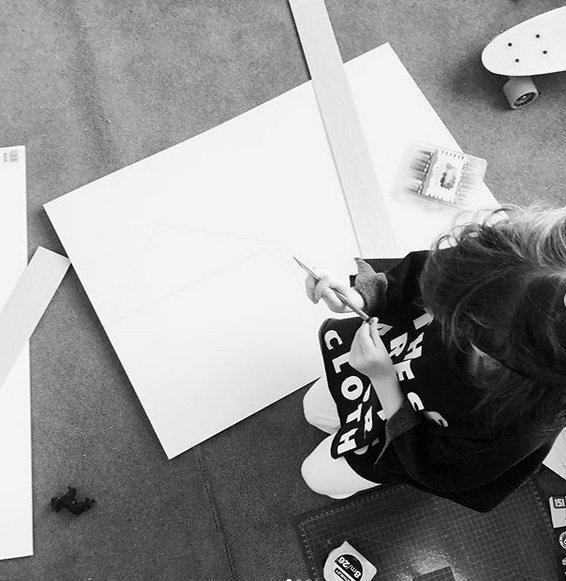 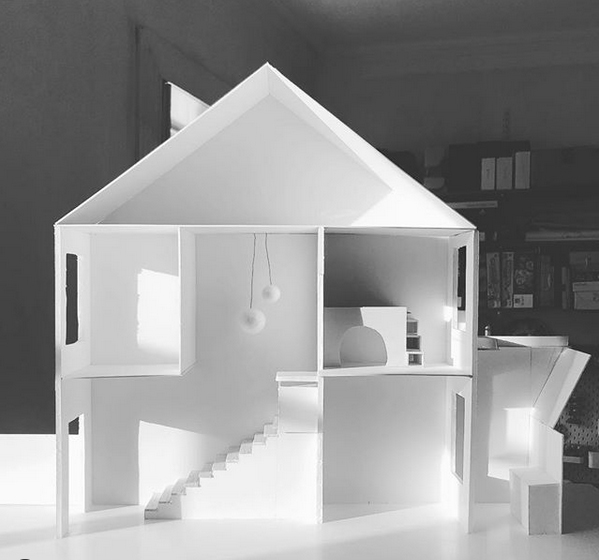 So, CC came up with her ideal song list, which ended up as Shallow, A Million Dreams and Halo, (Gaga and Beyonce having superseded Jonny) and we practised. When it came to the day, CC was stuffed with the cold and it was super windy and chilly (Scottish Summer), but she was super keen to do it anyway and soldier on. We arrived at the beach at 1pm and there were huge crowds already - it really is an amazing event. We pitched up and started singing. Clemence was SUPER nervous, and forgot the words the first time we sang. But after the first run through, the nerves went and we must have sang 30 times through the afternoon. It was amazing to watch her overcome her nerves and end up loving singing to a crowd. (Her new silver Main Story trousers certainly helped with the look!) You can imagine it was a pretty special day for me too! 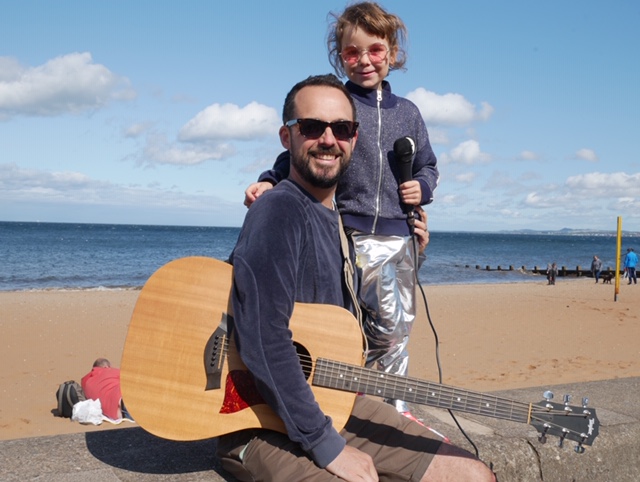 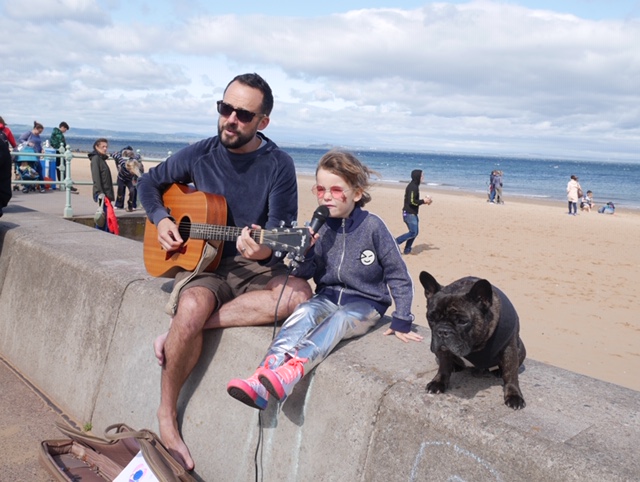 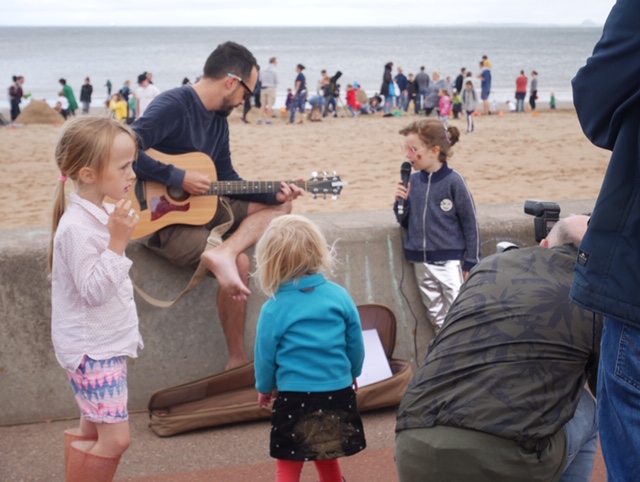 The next day, out of nowhere, she sat down in our window and picked up my guitar. She put it on her knee and held it properly and tried to play it. She then asked me to teach her some chords. This was the first time she'd really asked me to show her how to play something properly and she tried SO hard to play a proper chord, and strum properly and was completely focused.

I sat later on, talking to Kristina, and commented what an amazing experience the Beach Busk had been, and we wondered why it had had such an impact on her. It wasn't just the fact she got lots of attention for it. It really did feel like we were doing something together. A shared goal.

What I've reflected on since then was that she really got to see that a grown up can get nervous too, that a grown up can make mistakes - which I certainly did on the day. And that it was ok to make them. She wasn't embarassed to not be good at the guitar in front of me, and I think that was a really important lesson? 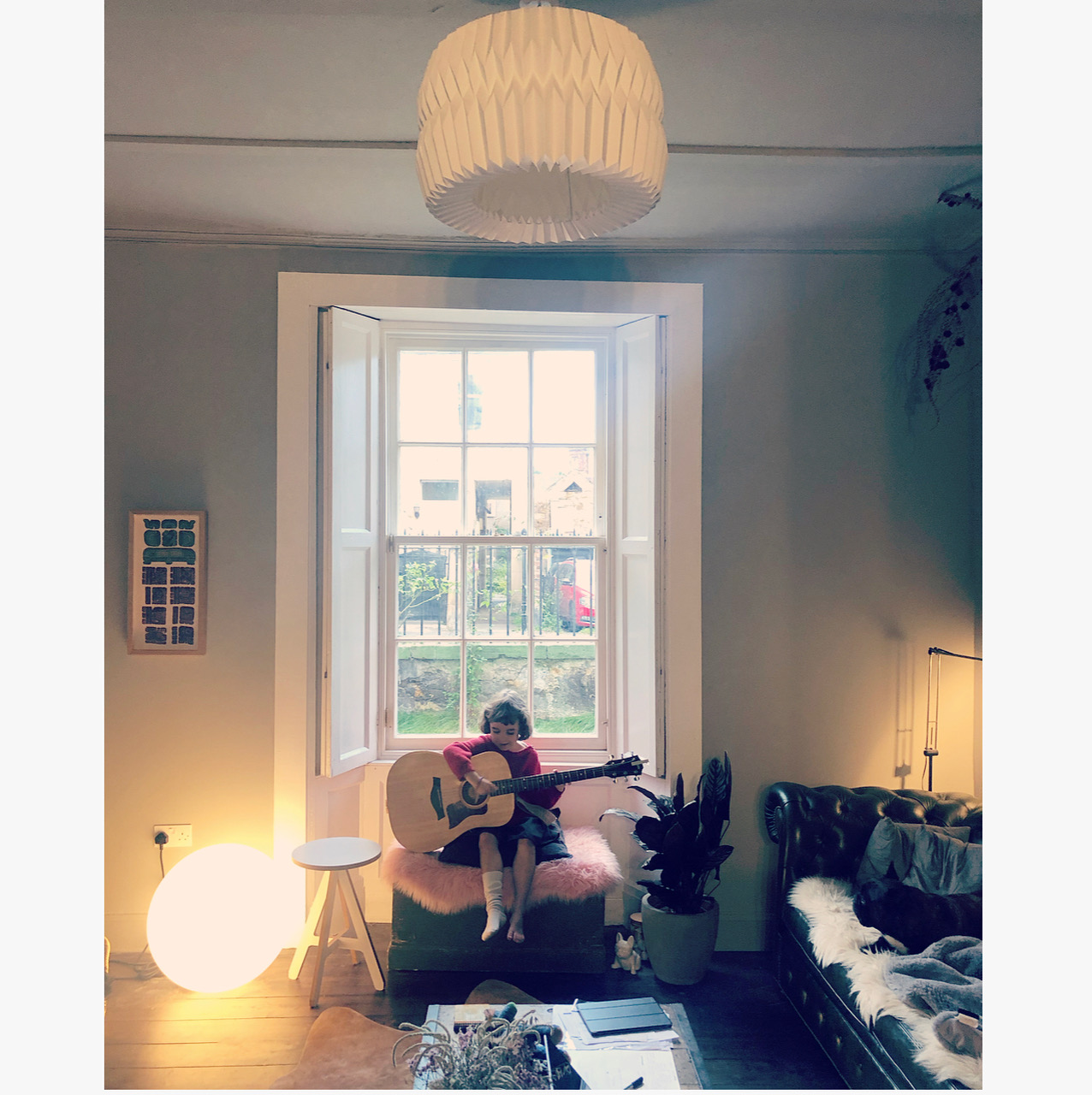 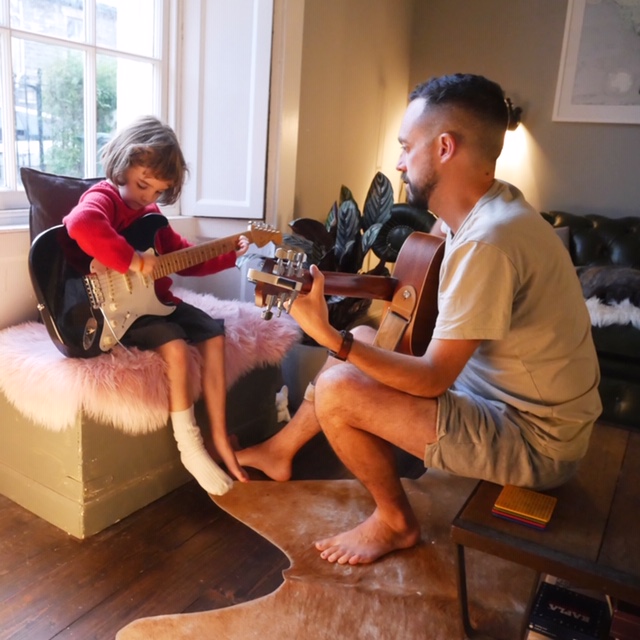 I've started looking for junior sized guitars for her. Interestingly, the National Guitar Academy suggests that age 9-10 is the best age to start to learn, and suggests that around age 5 children might be better to learn the ukelele. I'm not convinced though.. it's a different instrument, with different tuning and different chord arrangements. I'm more tempted to go to Loog guitars, who seem to agree that starting with a Ukelele is not the right approach... plus they make some awesome kit!

So that was our little moment, and I'm so glad I didn't push too hard and let her discover her interest in her own time, in her own space... with just a little gentle nudging from me! I can't help but think about HOW many hours and how much time though goes in to the background, to trickle down to a little moment like that... maybe something to think about?  And maybe we'll see you next year on the prom!